The NoMa Parks Foundation holds public meetings — which we called Community Conversations — to provide general updates on NoMa Parks progress and receive community feedback. These interactive meetings are a great way to learn more about the overall NoMa Parks initiative as well as to engage on park design with your neighbors and other stakeholders. 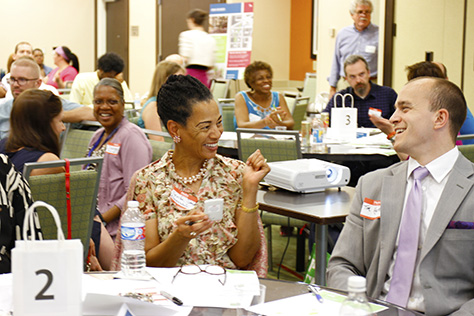 Below you will find materials for each meeting.

The NoMa Parks Foundation hosted the eighth NoMa Parks Community Conversation. More than 80 people came out to learn more about the final design and construction of “Tanner Park” (the winning name in our public vote for an official park name), learn more about Alethia Tanner, and hear about the progress of all parks projects.

More than 50 people attended the seventh Community Conversation hosted by the NoMa Parks Foundation. Neighbors gathered at the Hilton Garden Inn to hear more details on the playground, dog park, and plaza at “NoMa Green,” a naming exercise for the “NoMa Green” and 3rd and L parks, and updates on all things parks.

The NoMa Parks Foundation hosted over 50 guests for the sixth Community Conversation. Neighbors gathered at the Hilton Garden Inn for a presentation by the Foundation of the timeline and current status of all the parks projects, a presentation of the final design of the 3rd and L Street park by Lee and Associates, and an introduction to the Friends of NoMa Dogs, the group that will maintain and support the dog park at 3rd and L.

Over 50 guests were in attendance for the fifth NoMa Parks Community Conversation, held at the Hyatt Place Hotel. NPF introduced the landscape architecture firm Nelson Byrd Woltz, which was selected to design “NoMa Green.” Nelson Byrd Woltz shared a competition design that reflected what has been heard from residents over the last several years about their preferences for the park, what is known about the site now, such as historical information and topography, and also solicited input for additional ideas from the community.

The fourth NoMa Parks Community Conversation was a bit different — instead of a weeknight, it was held on a beautiful Saturday morning, and instead of inside of a conference room, it was held outside! At Storey Park, Lee and Associates provided an update on the 3rd and L Park project to more than 40 park enthusiasts and many of their four-legged canine friends. Following the presentation, attendees joined NoMa Parks staff for tours of the future “NoMa Green” and 3rd and L Street parks via the MBT.

The NoMa Parks Foundation held its third Community Conversation at the Hilton Garden Inn. More than 60 park enthusiasts attended, and almost half told us that this was the first NoMa Parks meeting they’d attended.

In addition to a brief overview of all of the planned NoMa parks projects, NPF introduced our new community engagement tool through the mySidewalk platform, called Imagine NoMa Parks. The Foundation will use the site — in addition to park-specific design meetings, future Community Conversations, presentations to civic groups, and this website — to exchange ideas with people interested in parks in NoMa.

At the Community Conversation, updates were provided on privately owned, publicly accessible spaces that developers are planning, and a design workshop for kids was held concurrent to the meeting (look for more opportunities for kids in the future).

The Conversation was capped off by an introduction to Lee and Associates, which will be designing the new park at 3rd and L Streets NE.

The NoMa Parks Foundation held its second Community Conversation at the Hilton Garden Inn. More than 80 park enthusiasts attended, with roughly 60% indicating that this meeting was the first NoMa Parks meeting they had attended.

To catch everyone up on the Foundation and its plan for parks, a brief introduction and overview on all the parks projects kicked off the meeting. This presentation was followed by presentations from the D.C. Department of General Services (DGS) on the parkland-acquisition process and from the D.C. Department of Parks and Recreation (DPR) on the dog park development process in the District. At the June 2015 Community Conversation and at subsequent events, NoMa community members identified these as key topics they wanted to learn more about.

The end of the meeting featured breakout “stations” where attendees had the opportunity to learn more about specific projects and engage with designers and planners to share their comments and questions. Breakout stations covered the NoMa Green, the 3rd and L Street Park, the L Street Plaza, and the Metropolitan Branch Trail, all of which were identified in the June meeting as topics desired for more in-depth exploration. The most popular station was the 3re and L Street Park, a recent acquisition that has attracted a lot of interest.

We look forward to seeing you at the next Community Conversation in March. Look for an announcement soon with the date, time, and location!